Use Yotta referral code ANIK1 and get 100 free tickets when signing up on Yotta Savings app. Both you and I will receive 100 tickets each after you sign up using the referral code, verify your account and make a deposit of any amount.

For free 100 Yotta tickets, sign up using my referral code ANIK1. Both you and I will get 100 tickets. It’s a win-win for both. 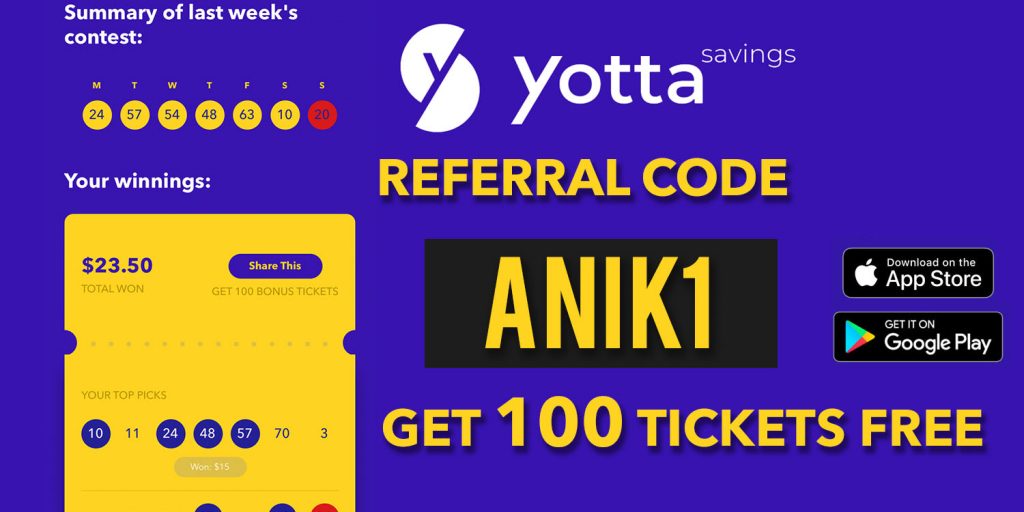 Yotta Savings is legit. It is not a scam. It is an FDIC insured savings account which pays back 0.2% base interest plus weekly prize money in the form of lottery winnings. Yotta’s effective interest rate is 3% to 4% which is much higher than even the highest interest paying competitors like Ally Bank. For your comparison, Bank of America pays 0.01% interest. That is why Yotta Savings is worth it! Holding amounts in Yotta gives better return on investment as compared to any other bank out there. Plus it also gives you a luck-based chance where you may end up winning $10 million.

You can read about them on Crunchbase and Product Hunt (backed by Y-Combinator). Yotta makes money by earning interest from partner banks. It uses some of those money to run the weekly lottery. The amount we hold in Yotta is in an FDIC insured account so it is risk free savings just like a regular bank. The plot twist is that for every $25 you save, you get a recurring ticket into weekly random number drawings with chances to win prizes ranging from $0.10 to the $10 million jackpot. Even if you never win a prize, you will still have your savings and the 0.2% base interest rate.

Yotta is free to use. There is zero fees to deposit money into Yotta. Likewise, zero fees if you want to withdraw the money back.

Yotta Savings Referral – How does it work?

The referral bonus of 100 tickets are awarded in the next week’s game. For instance if you join Yotta Savings using referral code on a Friday, the 100 tickets will show up on Sunday evening as that’s when the current week’s game will end and new week’s tickets open for number picking. In order to get the bonus tickets, you have to sign up using the referral code, verify your account and make your first deposit. Deposits can be made in multiples of $25. The referral tickets are valid for 1 week of game. You also get tickets for every $25 you hold in Yotta Savings. Those tickets do not expire and they will renew every week as long as you maintain the savings balance in Yotta.

For example, if you hold $500 in Yotta Savings then you will keep getting 20 tickets in each week’s game. Each ticket has 7 numbers. You can hand pick the numbers individually if you wish but I just use their auto pick feature. The auto pick feature automatically picks random numbers on each ticket. If you forget to pick your numbers, the app will do it for you before the game begins. That way you don’t even have to open the app everyday. Deposit your savings and let Yotta handle the rest. I usually check the numbers that are drawn everyday because of the notification at 6pm PST.

What are the lottery prizes on Yotta?

The lottery winnings range from $0.10 to $10 million. A random number (yellow ball) is drawn from Monday through Saturday. Then a random number (red ball) is drawn on Sunday. Hence at each week’s end 7 numbers have been drawn by a third party company. The drawing happens at 6pm PST everyday. The Yotta app notifies you as soon as the number is published.

Here are the prizes:

Every week, the more numbers you match the more you win. Out of 7 balls drawn, if you matched all 7 — you will get $10 million. Due to tax and annuity and how lottery winnings work, actually you would get $5.8 million lump sum. That is still quite a lot. If you match 5 yellow balls, you will get $800. So far I have seen multiple people have won $10, $15 and $300. As the app becomes popular and more people join the game, I expect that the bigger prizes like $10,000 will also be won by someone. It is basic math. Higher the number of users, higher the number of tickets, higher the likelihood of at least someone winning those big prizes.

Update: As of October 2020, the second prize is now a Tesla Model 3! Third prize is $5000. The prize value has increased across the board. Good luck!

Earnings below $600 are not reported for tax purposes. If you win more than $600 per calendar year, they will send you the necessary tax forms. It is that simple.

What I think of Yotta

So far I am impressed with Yotta. I moved my savings over to Yotta from Bank Of America which was only giving me 0.03% interest. At Yotta, I have been able to get the monthly savings bonus of 0.2% as well as earn lottery winnings. Most noticeably I recently won $15 at Yotta by matching 4 numbers which is the highest amount I have won in any lottery so far.

Yotta Savings is legit and I would happily recommend anyone to try it out. It is a good idea to hold some savings amount in liquid asset for emergency. You can hold that amount in Yotta instead of big banks for better returns. Actually Yotta gives better returns than Ally and Marcus. That is what convinced me to sign up. I have not looked back ever since.

Let me know if you have any questions about Yotta.

This site uses Akismet to reduce spam. Learn how your comment data is processed.